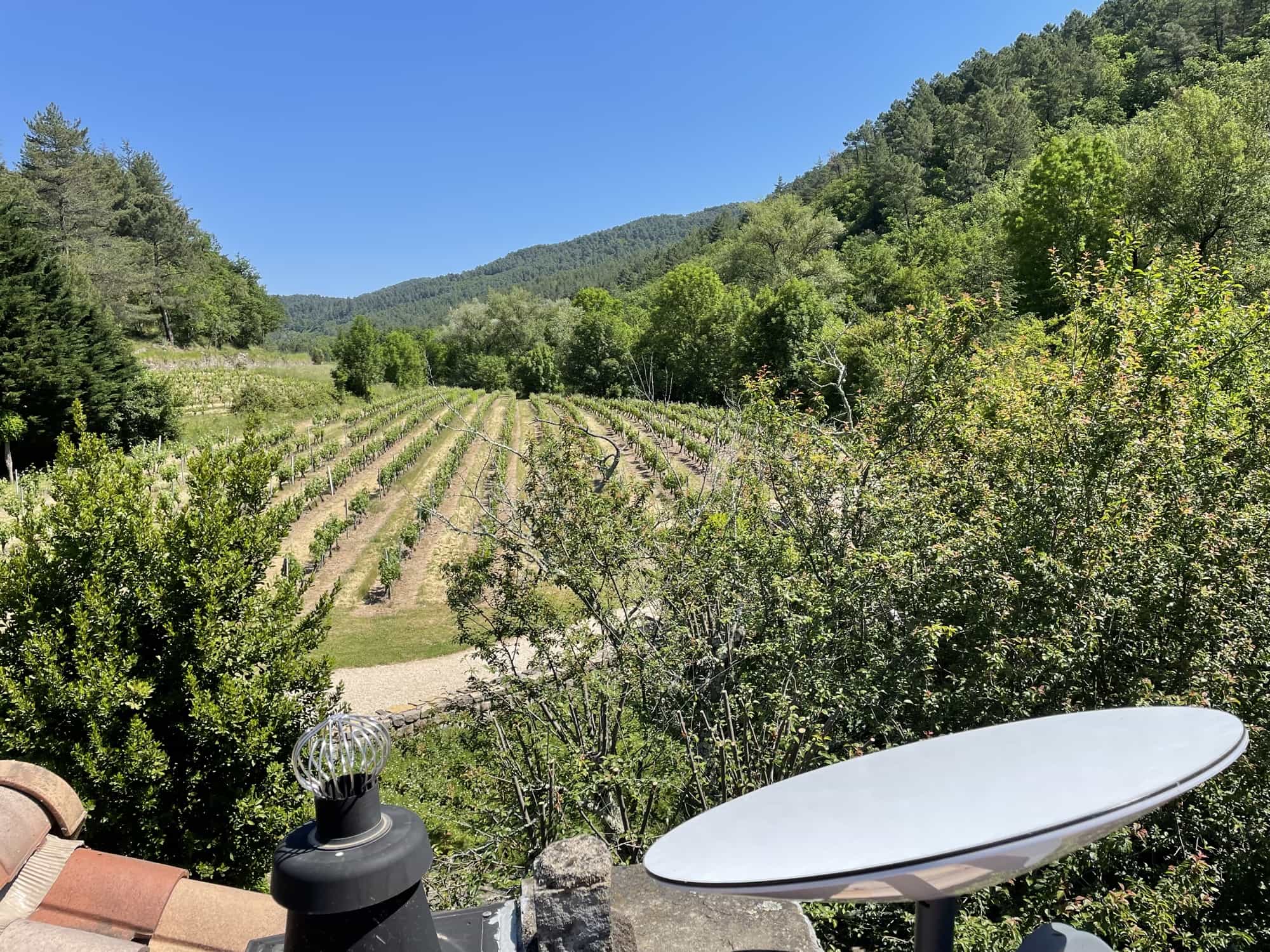 You come to Le Moulin de Lande to relax, enjoy the sun, the pool, the river, the Ardèche, and much more. In your holiday home you sometimes want to watch some news or some good entertainment. We’ve been at Le Moulin de Lande since 2010. We’ve seen the way in which people keep up with the news, gather information and watch entertainment, change over the years. For us as hosts, priorities for providing electronic entertainment shifted from offering good tv reception to providing fast internet with Starlink.

In 2010, people watched television. We invited all our guests to watch the football world championship on a big screen in our living room. There was an old, complicated system with multiple satellite dishes here. We simplified and updated it to ensure that guests could watch tv with a high-quality reception.

When we arrived, internet consisted of one, very slow connection. Parts of our town took a few more years to get connected. There was only one wifi point and it was in our own living room. The previous owners said that most of the guests did not require internet: if guests wanted internet, they could receive wifi at the pool, more or less…

We knew that wasn’t good enough, so we set about changing it. Every gîte got its own wifi access point. This is rural France, so our internet comes over an ADSL (telephone) line. We subscribed to a second ADSL line and installed a system to balance internet traffic over both lines. You can think of it as widening a road with more lanes for cars to drive on: you’re not increasing the maximum speed, but more cars can pass anyway.

This resulted in “okay” internet for multiple people at the same time, for the most common uses of e-mail, simple web browsing and alike. However, it’s a far cry from the broadband speeds that rapidly became the norm in cities and other countries. “Netflix” became a verb for people… Youtube turned into the most important source of infotainment. Sometimes guests wouldn’t even switch on their television set during their entire stay. They just required fast internet.

When you live in the countryside, not close to a village or city, broadband internet is an elusive goal. ADSL becomes slow at this distance. It’s just physics; nothing you can do about it. Mobile coverage is weak. Satellite internet is great for downloading big files, but unusable even for normal web browsing because of the high latency. And cable or fibre?

Commercial operators will not invest here. So municipalities work with a foundation to bring fibre to the home. When? Well, it’s complicated. Let’s say that we stand a tiny chance to get connected from 2024 onwards. So what do you do to provide faster internet to your guests?

Enter Starlink, one of the companies of Elon Musk. A radical idea: many satellites flying close to the Earth, so latency is low. Satellites that send laser signals in space, since light travels twice as fast in vacuum than in optical fibre. A smart dish that can move and that tracks satellites across the sky for maximum reception. Coverage in rural, remote areas. Speeds that rival those offered by fibre.

As I am writing this, the system has been working for two weeks, without any issues. It’s still being tested globally, but it’s remarkably reliable. And it is fast! It’s fast enough to handle multiple people watching Netflix, Youtube and more. Internet in our four holiday homes is up to ten times faster than before. We’re evaluating if our current wifi setup should be upgraded, because we currently cannot transmit the full speed of Starlink to the gîtes. Moreover, Starlink believes they can double their current speeds by the end of 2021. Who would have imagined that?

Fast internet with Starlink looks to be the ideal solution until fibre arrives. We are happy to provide this added value to our guests. So, what will the coming years bring for connectivity? Will mobile coverage be improved? Will fibre arrive at Le Moulin de Lande? Who knows. Maybe in a few years time we can remove the television sets from our holiday homes and take down the tv satellite dish. Probably nobody will miss them. You will be watching the next football championship on your internet-connected device anyway.

Your holiday cottage in the heart of the Ardèche: four holiday homes at an old water mill. Enjoy peace and quiet at a small river with private sandy beach, relax at the pool or explore the many sights of the Ardèche.